Where did all of the hardware stores go? 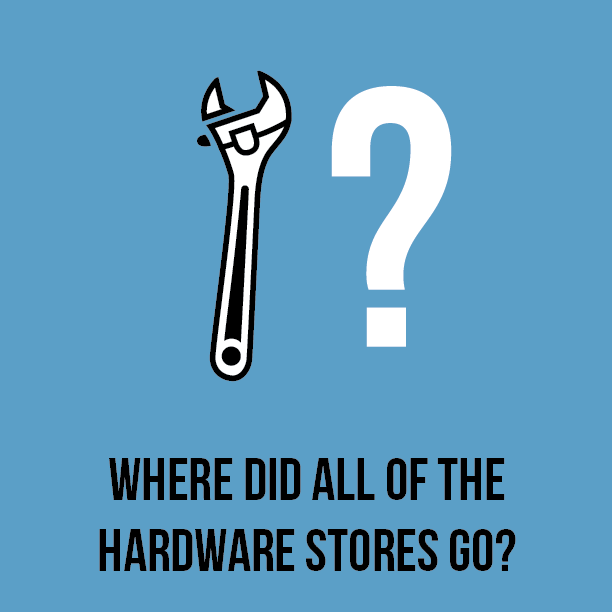 There’s a lot of exciting news in the world of business and retail here in Detroit this summer. We have two new grocery stores in midtown. We’ve got a slice of the new American manufacturing right over on Canfield. And even three exciting popup programs (notably, two of which are outside of the 7.2 sq mile downtown zone). It’s definitely a summer of progress.

But notably absent in the list of new businesses showing up all over the city is the likes of hardware stores, laundromats, and drug stores. Electronic repair shops, music shops, and day care facilities remain unimagined and unopened, a casualty of the new economy and a shrinking city.

When we turn to the media and discussion surrounding the new businesses in the city, it’s easy to gravitate towards the “sexy” businesses, the coffee shops and craft breweries, the interior design shops, and upscale restaurants. That’s not to say that these businesses aren’t important or useful; I even helped put on a boutique t-shirt shop in West Village last fall that was trying to be as “sexy” as they come. However, it’s important to recognize that these businesses are not the bellwether of a new and revitalized Detroit, we’ve got a long way to go. If we want to talk about the next chapter of Detroit history, we can start talking when we start to see businesses popping up over on Schoolcraft and Van Dyke, not Cass and Woodward.

Despite what you might see regarding rising rent downtown, the city is still losing people and will likely to continue for another decade or more. Currently there’s one part of Detroit that is on the mend, and when we start reclaiming some of the $200 Million spent at grocery stores outside of Detroit, give me a call (I’d love to see Curbed do a liveblog of an opening of a Spartan Store over on the eastside). I love my craft beer as much as the next white guy from out of town, but let’s be honest about how important these businesses are to the city at a whole. There’s plenty of money that is just leaking out of the city into the suburban big box stores, and it’s about time that that money stays inside the city limits. The businesses that are going to cater to a working and successful city aren’t going to be the “sexy” niche stores that create buzz and excitement, they’re going to be hardware stores, laundromats, and grocery stores. They’re going to be businesses that help people save money right here inside of Detroit. It’s going to be challenging to build businesses that can compete on price and convenience with the likes of Walmart and Home Depot, but if some marketing experts can sell you a $550 analog watch in the digital age, I’m sure we can come up with some creative solutions.

Look, I’m excited to see some cool shops opening up around Detroit and I’ll be patronizing these businesses, but let’s focus on what’s going on outside of the Midtown/Downtown/Corktown bubble. The true retail revolution is going to occur in the other 95% (142 sq mi vs 7.2 sq mi) of the city. Let’s see some more projects like the Revolve Detroit program over in Levernois and the shops Jefferson Chalmers area. And let’s make sure we include some hardware stores in the mix.